WHY ISN'T THE UNITED STATES A MEMBER OF THE BASEL CONVENTION?

As the internet of things grows in proliferation and artificial intelligence makes its way into our homes, there is no denying that technology is still advancing at a rapid pace. While the benefits of technological innovation and advancement have become apparent, one major downside has warranted a global response: the growing problem of hazardous waste.

In 1989, foreign diplomats (called Plenipotentiaries) met in Basel, Switzerland, to discuss the global transport and disposal of hazardous waste, including e-waste. The outcome of their meeting was the Basel Convention, short for its full name: The Basel Convention on the Control of Trans-boundary Movements of Hazardous Wastes and Their Disposal.

We'll be looking at the Basel Convention, why it was (and remains) an important global initiative, and the extent, to date, of the United States' involvement in it.

What is the Basel Convention?

In the 1970s, developed nations began exploring the cost-efficient disposal of technological waste (materials and substances). With the rise of NIMBY, a phrase meaning “Not in My Backyard,” local opposition rose against the use of domestic land and landfills for dumping hazardous waste. With this opposition, nations looked beyond their borders to Eastern Europe, Africa, and other third world and developing countries.

Import and export of these hazardous materials and substances continued for decades until reports surfaced detailing congenital disabilities and other health issues arising in places where people were being exposed to the toxic metals dumped by first world countries. These reports were met with a general appeal to stop international waste disposal.

These appeals came to a head and were addressed with the Basel Convention. The primary goal of the Basel Convention was, and remains, to reduce trans-boundary movements of hazardous wastes between nations and to prevent the international transport and dumping of waste from developed to developing countries.

The agreement has additional objectives, including:

Why is the Basel Convention Important?

Regardless of your personal beliefs, written into the Constitution of the World Health Organization are these words, "The enjoyment of the highest attainable standard of health is one of the fundamental rights of every human being without distinction of race, religion, political belief, economic or social condition."

Clean environmental surroundings are essential to good health. Groundwater contamination and toxic gas emissions into the air are two horrific consequences of improper disposal of hazardous waste. Toxic substances from industrial and manufacturing operations contain highly hazardous materials that must be disposed of properly. When sent to developing nations without protections, they can a devastating impact on.

Concerns lie not only for the people who live in these countries but also for plant life and animals. Heavy metals from hazardous waste can contaminate the soil and leak through to the groundwater, traveling from ponds and rivers to oceans and seas and making their way into the global food supply chain.

Why isn’t the United States a part of the Basel Convention?

Technically, the United States is a signatory to the Basel Convention, though they have not yet become a party to the Basel Convention. That means they offer it political support and have shown a willingness to continue to engage in the treaty process, but they've not consented to be bound by it. The reasons for this distinction are complicated.

The United States Government, Like So Many, Gets Backlogged

The U.S. was one of the first countries to sign the Basel Convention, back in 1990. In 1992, the Senate advised for consent to ratification, but the President (Bill Clinton) never ratified the agreement. It then joined a pile of backlogged initiatives.

When backlogs peak, the most visible challenges get addressed first, and that's what has happened to the Basel Convention. Time and time again in the United States, as administrations have changed, priorities shifted accordingly, and forced the focus away from the Basel Convention's ratification.

Until 2016, partisan politics were not a factor in this initiative's placement on the backburner. The Senate's advice and consent in 1992 came with support from both Republicans and Democrats. Ratification of the Basel Convention has been a policy priority under presidents from both parties, from Bill Clinton to George W. Bush, to Barack Obama. The problem is that legislation on Basel was always set aside to legislate on more immediately pressing issues. The story of the Basel Convention continues to be one of legal limbo.

The Trump administration has been accused by environmental activists of being isolationist, pulling out of the Paris Accord and acting as an outlier on global efforts to manage all forms of waste, including single use plastic waste. With the administration's concerted efforts to roll back EPA and other environmental regulations, experts do not foresee the Basel Convention as a priority any time soon.

The United States Is a Leading Member of the OECD

The Organization for Economic Cooperation and Development (OECD) was established in 1960 in recognition of member nations' economic dependencies. Historically, members have concerned themselves with various issues related to globalization, including the trans-boundary movement of waste.

The OECD Council Decision is "is a multilateral agreement that establishes procedural and substantive controls for the import and export of hazardous waste for recovery between OECD member nations".

Recovery operations refer to activities leading to resource recovery, recycling, reclamation, direct re-use or alternative uses. This agreement facilitates such waste trade and minimizes the possibility that such wastes will be abandoned or handled illegally.

The United States has characterized its national policy regarding movements of hazardous waste as in compliance with the OECD, and the OECD's guidance and council acts are widely considered by many politicians as harmonious to the Basel Convention.

The United States Has a Working Strategy in Place

The United States Environmental Protection Agency (EPA) has the authority to control hazardous waste from the "cradle-to-grave," according to the Resource Conservation and Recovery Act (RCRA). This includes the generation, transportation, treatment, storage, and disposal of hazardous waste, including a section that addresses the export and import of hazardous waste: Section 3017 of the RCRA.

It seemed, at the time that the Basel Convention was first signed and transmitted to the Senate for its advice and consent, a comprehensive system for the environmentally sound management of hazardous wastes was already in place in the U.S.

However, the Bush administration raised concerns about gaps in EPA's authority regarding requiring the environmentally practical handling of waste exports, the power to take back illegally exported wastes, and the authority to cover municipal solid waste (MSW), MSW ashes, as well as hazardous wastes not covered by the RCRA. They suspended the ratification of the Basel Convention until such legislation has been enacted. 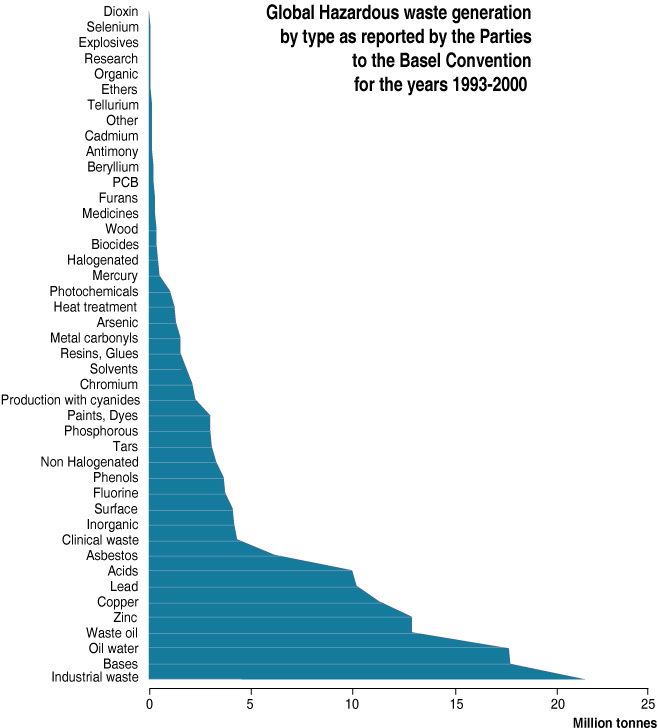 The Legalities Are Complicated

From a legal standpoint, questions exist as to whether national laws have the proper legal authority over national companies to carry out its obligations under the Basel Convention. This legal authority to implement the U.S. obligations under the Basel Convention has been an issue since it has been submitted to the Senate for its advice and consent.

The Case for The United States to Ratify the Basel Convention

These realities combine to make it all the more confusing to outside nations that the United States is a Signatory party but have yet to actually enforce the Basel Convention. Even more confounding, they were one of the first countries to accept the obligations when they were informally created.

So, the question for many might be, why don't they want to protect the world's ecosystem? If the United States were to be a full Party to the Basel Convention, other countries would be compelled to participate more fully and enforce its regulations. The United States' lack of participation in the Basel Convention creates a large "gap" in the international treaty's purpose and may even inspire other countries into non-compliance.

The United States' support for a crucial treaty that looks to protect the international ecosystem and enforces cradle to grave responsibility by all industries would likely result in unquestioned solidarity in the Basel Convention's mission.

The Basel Ban Amendment Conflicts with the OECD

Further complicating matters, in 1995, the Basel Ban Amendment was adopted -- also referred to as the OECD/non-OECD Ban. The Basel Ban Amendment was a result of the sentiment that the "prior notice and content" requirements of the Basel Convention were insufficient in preventing the dumping of waste from wealthy to impoverished countries. It prohibits the export of hazardous waste from OECD countries to non-OECD countries.

While industrial groups have been completely opposed to the Ban Amendment, Basel Action Network, a charitable non-governmental organization formed in 1997, has vocalized strong opposition to the U.S. Basel Ratification without the Ban Amendment.

The aim of the Basel Convention was, and to this day remains, quite clear: To shield human health from the dangerous and negative effects of hazardous wastes. Basel not only seeks to prevent the illegal dumping of hazardous waste, but it also encourages environmentally sound disposal in the country of origin.

As of October 2020, 187 parties adhere to this global Convention. It has the acceptance of the United Nations and the European Union. However, the United States (and Haiti) are still not a part of the Convention, despite a widespread belief that their formal support is long overdue.